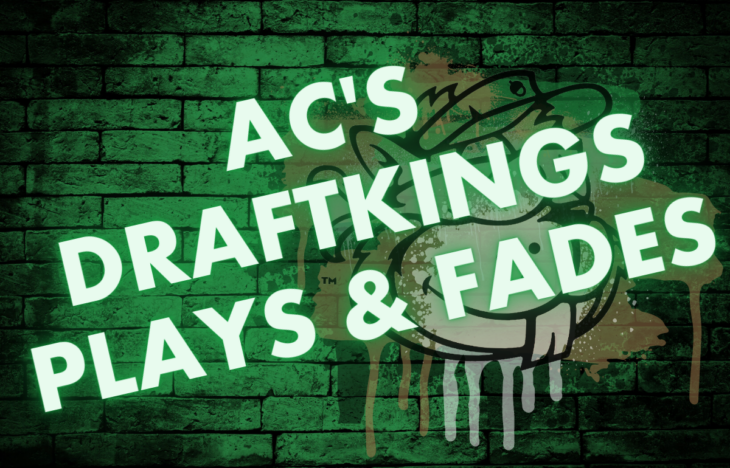 Yoooooo what's up golf feens!? AC here offering you my thoughts on THE CJ CUP DraftKings plays & fades. First things first, we got our first winner of the season last week with Keegan Bradley taking down the ZOZO CHAMPIONSHIP! Hayden Buckley and Cameron Champ came up big for us in the bottom tier as well. This week we get the same type of format as last week but a MUCH stronger field. Congaree Golf Club is set to host THE CJ CUP in South Carolina. Let's get you set to see some green screens on DraftKings.

Big shout out to TJ's Crazy Marcus for his efforts on the new feature image at the top of the article! For more information on THE CJ CUP, you can find my complete breakdown of the field, course, and key stats in the weekly preview.

This range very likely just ends up being a plug-and-play of the lowest projected ownership. Do I mind playing a 30% owned Rory? Not at all. Betting him without parlaying it with something else is pretty bad value and I don't think you can fade him. Rory has arguably been the best player in the world over the last 10 years or so and is on the brink of snagging the world #1 title for the 9th time. He also just so happens to LOVE Tom Fazio's designs. Which include last season's CJ Cup host, The Summit Club, and Qual Hollow where he has won three times. Form. Check. Balls. Check. Stud. Check.

Speaking of world #1s, enter Mr. Scheffler. We haven't seen Scottie since the Tour Championship. It's not something I'm worried about given he's guaranteed a couple of rounds to knock off the rust before he goes nuclear for a couple of rounds. He will be able to swing freely at Congaree and though putting has been his weakness, bermudagrass has been his best surface. He's also got Rory breathing down his neck for the top spot.

Sheff and Burns seem to be the best of buddies so only fitting that ol Bermuda Burnsy makes the plays. The short game will not be a problem for Burns and his accuracy off the tee, or lack thereof, shouldn't be an issue either. Bombs away, Burnsy! Burns may also end up being the lowest owned in the top tier.

I was going to get to this first but got carried away with Rory. Rahm is my fade. That's just the way it is. He's the second-highest projected and second-highest price. Pretty sure I said the exact same thing about Homa two weeks ago. This will be scary if Rahm finishes exactly T20. And it is in the realm of possibility. Rahm has the worst approach game in the last six months amongst the top tier and some of the worst scrambling as well. He will be able to bomb it but so can everyone else around him.

Get used to seeing these two guys in the plays this season. Was I disappointed by both last week? Meh. It's such a weird event that I can quickly dismiss it and not look back. Both of them are just so damn good off the tee. CoCo is also phenomenal in approach. Neither are strong putters but bermuda has been their best surface. Guaranteed four rounds and lots of birdie potential? ALL ABOARD!

One of these events, Deki is going to burn me. It hasn't happened yet or at least in a long time. The game just isn't sharp and we're never sure how the body is either. There's just a bit more risk there.

I whiffed pretty badly in this range last week. Wyndham saved me complete embarrassment and I guess Rickie sort of choking in the final round helped too. But it also cost me a bunch as I had the right pieces, just didn't mix up properly. This week, I'm spicing it up and going way low with three guys who did not fly to Japan.

Killa Keith is a bomber who eats strokes gained off the tee for breakfast. He's a great scrambler and when you turn on the bermudagrass filters, he turns into Super Killa Keith. He will be dangerous this week if he can get the irons going strong. It wouldn't be very wise of me to not have at least one Koren player in a Korean-sponsored event. SH Kim fits nicely. Through his first three PGA Tour events, he's managed a 36th, 13th, and 4th at the Shriners. Clearly going to at least finish runner-up and THE CJ CUP. Postman should be well-rested and feel right at home in SC. The form is great with discount JT and even though he didn't gain strokes with the flat stick in Las Vegas, the rest of the game was there and he finished 20th. Basically his 7th top 20 in his last 10 starts.

It always feels weird picking a fade here. I don't want to cop-out and choose someone lame like Matt Kuchar. Fortunately, he's down in the 6ks. But you get what I mean. I think Tommy fits a good fade here. There was some excitement brewing for him last week. His T53 quickly doused those flames. Don't think we will see much better this week. he is one of the few that played here last season but in different conditions and a much, much weaker field.

Probably going to be hard to replicate last week's $6k baes as Nita would like to call em. Both Buckley and Champ finished in the top 10!! LFG! It's been a while since Riley has been down this low. I think this will be the last time we ever see him in the $6k range again. A lot of talent and just a bit of poor form. He's still top 20 in in SG OTT, APP, driving distance, birdies, GIR%, and 8th in opps gained in the last six months. Mullinax can pump it and the irons have been solid as well. Makes birdies. That's enough for me! Smalley isn't a prolific scorer but is a pure ball striker and doesn't make many bogeys. He knows how to find the green and make par. A solid 25th last week at the ZOZO.