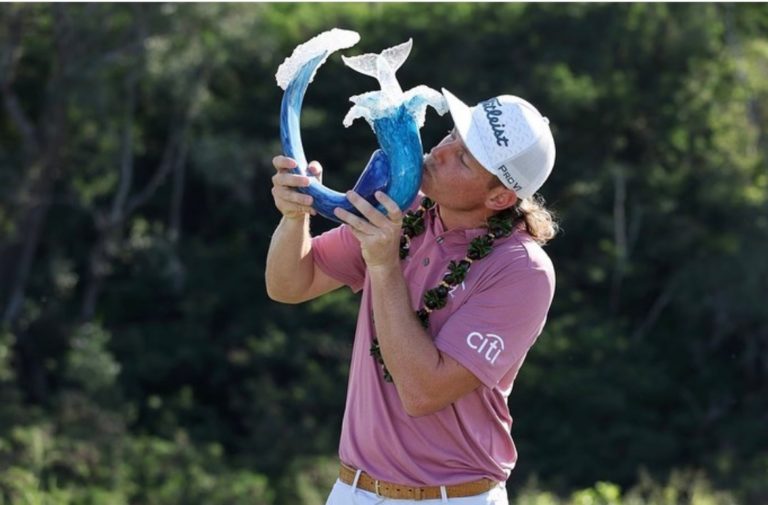 a Nuclear hot start for the pga tour in hawaii

If the 2022 Sentry Tournament of Champions was any indicator of how this year in golf will look then fans across the planet need to buckle up. The plantation course at Kapalua served up a delicious dose of escapism in countless aspects. Mark Rolfing on the call, whales jumping in Honolua Bay, players diving deep into the scoreboard, and a final round slugfest for all to see. Can golf addicts ask for much more after this week? A resounding "No!" has to be my only answer to this rhetorical question.

The Birdie Barrage at Kapalua

To begin, Justin Thomas broke the course record on Saturday when he carded a 61 to claw his way back into contention. At a location where JT has experienced such ups and downs, his play in the third round reminded us of what he's capable of. Also, Bryson wore a regular hat all week long. Thank God. Patrick Cantlay awoke from a 4-month slumber to show us how little rust his golf game has. In contrast, Jason Kokrak should have stayed on his massive yacht as he finished dead last. Matt Jones shot -18 on his last 22 holes to battle back into the conversation. Jones caused the guys in front to pay close attention to the leaderboard throughout the weekend. However, the two players in front just happened to be Cam Smith and Jon Rahm. Ever heard of them?

In fact, the two put on a show for us this past weekend. Going birdie for birdie in rounds three and four, Smith and Rahm kept trading haymakers. With no wind to test the players nor blow out the mullet, Cam Smith was able to reach the lowest score in tour history. Similar to the 2021 BMW Championship between Cantlay and Bryson, the leaders at Kapalua glued fans to their televisions. We all watched putts splash like whales and approach shots fly like darts. A 36 hole shootout between two players with wildly different styles was exactly what the doctor ordered after some time off from the game. Ready for more? Me too!

Onward to the Sony Open

Following up the excitement from Maui, players took to Oahu to fight it out at the Sony Open at Waialae. While the conditions remained benign throughout the week, two particular instances offered some color to the tournament. First, Kevin Na and Grayson Murray engaged in the pillow fight of the century. Murray called out Na for his utterly slow play, especially around the greens. Kevin Na turned around and reminded Grayson Murray about how often he misses the cut. A true Twitter explosion took off between two guys who do not move the needle. The second notable moment happened from 277 yards away from the 18th pin. Hideki Matsuyama slammed Russell Henley into a coffin with the 3-wood of all 3-woods. Think you could hit that shot? Not a chance!

Regardless of the lack of difficulty on the course, the entertainment factor shot through the roof. The sunny and surfy surroundings of the Hawaiian islands took me on a getaway from my living room and the 45-degree winter weather. I hope all viewers enjoyed a similar experience. Furthermore, join me, golf sickos and strap in, 2022 should be a doozie! Just please do not strap yourself to the back of a pig and roll in the mud. Mahalo!

As a freelance writer, Taylor McCutcheon will focus on golf adjacent, cultural content in the world of golf. Welcome Taylor to the team and help spread the word by sharing his content.