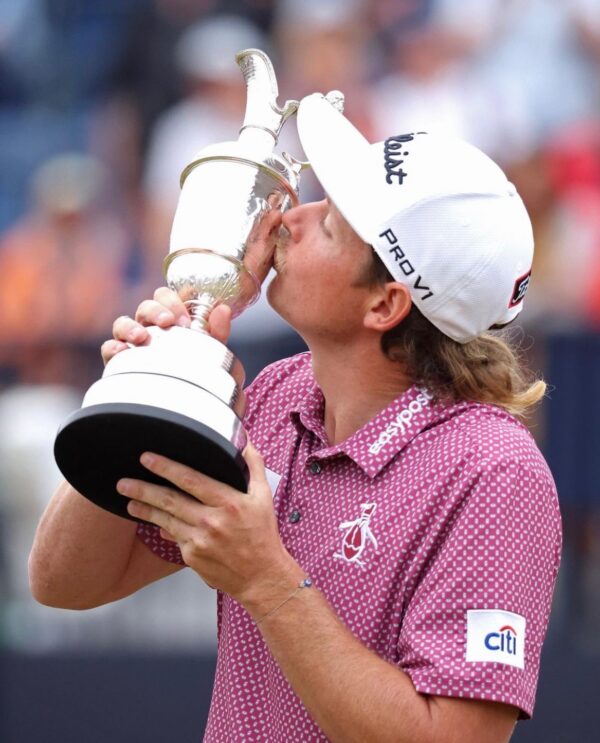 This past week, not one but two packages of LIV Golf merchandise arrived at my door. Now, I did not order these items and I have no clue who sent them. But, I do have some ideas. How did Greg Norman get my address? Does he want to set up a business lunch? Truthfully, I am not surprised he is such a fan of my work, however, I did not expect to be groomed like this. Regardless of who is playing a joke on me, these mystery boxes led me to reflect on the Saudi golf league. In this latest blog, I focus on three different figures across the golf landscape who face difficult crossroads carrying their legacies in their hands.

On Sunday of the 2022 Open Championship at St. Andrew’s, Cameron Smith poured two beers into the Claret Jug after pouring countless putts into the Old Course. During the final round, Smith birdied holes 10 through 14 en route to carding 20 under par. Running down Rory and the Jug, Smith took his win probability from 6.1% to 55.9% in that 5-hole stretch. Using his imagination in and around the greens, Cam relished the firm and fast conditions similar to Royal Melbourne.  Now, Smith joins Henrik Stenson and Greg Norman as the only 3 players to shoot 64 or better on Sunday en route to winning the Open. Fingers crossed the newly minted #2 player in the world does not join Norman, Stenson, and the Saudi hit and giggle. Supposedly, Cam Smith will depart for LIV and $100 million after the playoffs. Furthermore, he’d be the first player to go who finds himself in his prime with the golf world in his grips. As an avid fan of the Aussie, watching Cam decidedly sell out for the Saudis would deflate my enthusiasm for the sport and athletes I look up to.

The Dreams of Tiger Woods Cannot Be Bought!

Remember the US Open in 2008? Playing on a broken leg, Tiger Woods defeated Rocco Mediate in an 18-hole playoff at Torrey Pines. Channeling this same gritty energy at the 2022 Open Championship, the GOAT offered his honest opinion on LIV. Focusing on the hard work required on the PGA Tour, Woods said “[t]hese players are doing it for guaranteed money. What is the incentive to practice? What is the incentive to go out there and earn it in the dirt?” Intentionally, Tiger used his interview time to zero in on how the environment of LIV does not facilitate well-earned achievement. What's more, Tiger spent 683 weeks as the number 1 ranked player in the world. Determination and consistent excellence are ingrained in his DNA. With so many players revering Tiger and his achievements, I expect they will listen closely to his words and stay committed to the PGA Tour. Golfers like Max Homa and Justin Thomas stand out as players who take their craft and the integrity of the game seriously. For these guys who want to build a legacy while making great money, although maybe not quite 800 million, the PGA Tour provides the best platform.

The European Ryder Cup Team Ices Out the Ice Man!

Communicating their commitment to legacy, the European Ryder Cup Team swiftly relieved Henrik Stenson of his captaincy after he joined the Saudi golf league. Back in March when Stenson was selected to lead the European team, he issued a statement saying “I am extremely proud and humbled to be the European Ryder Cup’s next captain.” Now, he sarcastically jokes about winning LIV events as the “captain” of the Majesticks with other scum bags like Ian Poulter. Clearly, the amount of money the Saudis offered Stenson outweighed his love for the Ryder Cup - the team event that defined his career. The 46-year-old and 173rd-ranked player in the world has not been relevant in pro golf since his Open championship victory in 2016. At Troon, the Ice Man stood tall against Mickelson and now the two hide behind familial excuses in media interviews. Moving forward with Luke Donald, the new European Ryder Cup team captain began his tenure with the statement “I wouldn’t do a Henrik.”

Most recently this Tuesday, Hudson Swafford, Matt Jones, and Talor Gooch of LIV golf filed a Temporary Restraining Order against the PGA Tour. Fighting for a spot in the playoffs, these three tried to have their cake and eat it too. In the most unironic tone, the attorney representing these three Saudi golfers referred to them as “these three poor kids.” Swafford, Jones, and Gooch collectively earned $36 million on the PGA Tour. How does that qualify them as poor? Unfortunately for the children, Judge Beth L. Freeman denied their entry into the FedEx Cup playoffs. Inevitably, more court cases remain on the horizon and many are nervous that LIV will claim legal victories. Me, I believe the PGA Tour has been preparing to overcome this sideshow much longer than we realize. Cheers!

As a freelance writer, Taylor McCutcheon focuses on golf adjacent, cultural content in the world of golf. Welcome Taylor to the team and help spread the word by sharing his content.